Far Cry 2: Fortune’s Edition is a First-Person Shooter, Combat, Single-player, and Multiplayer video game owned by Ubisoft. The storyline from the previous edition continues in a way that you are to change the tactics, and planning in order to bring the enemies down to their knees, meet various battle bosses and deal with the corrupt agencies, become the warlord, and complete various challenges.

The theme-play sets you into the warfare where you have to become part of a clan and your objective is to sneak into the enemy’s baseline and destroy all the strongholds while playing. Use different kinds of weapons, meet the battle bosses, complete a number of solo missions, and also indulge in the multiplayer mode where you can get help from other players. There are dozens of vehicles to simulate, ultimate weapons, and thousands of enemies, along with open-world battles, destructible atmosphere, and great adventures are also plotted over here. 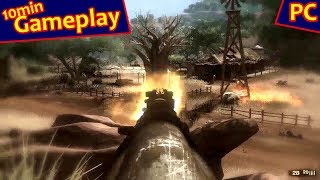 Far Cry New Dawn is an Action-Adventure, First-person Shooter, Single-player and Multiplayer video game brought to you by Ubisoft. The game offers a beautiful world where you control a character from a first-person viewpoint to defeat enemies for in-game points. Serving as the spin-off of the long-running series, Far Cry, the game acts as the narrative sequel to the recently released video game Far Cry 5. It has lots of prominent features, and the game releases with lots of improvements and several modifications.

The plot takes place 17th years after the event happened in Far Cry 5, where after a massive nuclear war, survivors are struggling to rebuild their lands in Hope County, where the game is set. Like its previous titles, the game mixes the elements of FPS, Adventure, and Action games, taking place in the open-world environment where the player can move freely either on foot or using vehicles. Using the customization feature, the player can change the appearance of his character with items and other accessories.