Battlestrike Shadow of Stalingrad is an Action-Adventure, First-Person Shooter, Military, War, and Single-Player video game by City Interactive. The storyline sets you in the warzone designed in Stalingrad where you have to shoot the enemies, get help from your seniors and complete a number of objectives. Take dozens of missions, manage to fight against the brutal forces, maintain your health while shooting, and become the savior of the nation.

Go to different locations, encounter a hostile environment, be careful while playing the role of a comrade, and deal with the enemies. Use your rifle, sniper gun, machine gun, AK-47, grenades, flashbangs to take the enemies by surprise and save your ass from the upcoming launchers, bullets, and canons. The gameplay features amazing and difficult scenes, unique sound effects, real-time strategic effects, and hundreds of missions and thousands of soldiers are trapped in this game. 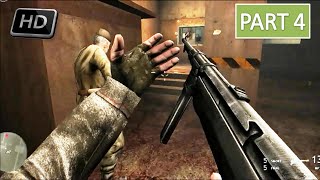 Battlestrike The Siege is an Action-Adventure, Combat, Military, War, First-Person Shooter, and Single-player video game offered by City Interactive. In the line of content, your job is to mount over different missions set in World War 2, take enemies down and complete the challenges given to you. While playing, you may encounter hundreds of situations, relive the war moments and experience the world war conditions, take enemies down and become the master of war.

In the longplay, your objectives are updated from time to time. Sometimes you will be helping the air force while using air-machine guns to shoot the enemy choppers and planes, and sometimes you are taken to the battlefield missions. Change the scenarios of the war by using your weapons, shooting skills, plan your strategy, and do not fail your homeland. Special features like different missions, intuitive controls, real-time effects, thrilling sounds, and amazing 3D animations are plotted here.

Battlestrike Force of Resistance is a Shooting, First-Person Perspective, War, Military, and Single-player video game by City Interactive. The storyline sets you into the European territory where Germans have taken over the lands and some of the groups are fighting for the cause. Your job here is to defend the land, gather your squad, weapons, and courage to face the enemies, kill them and take the chaos out of the territory.

While on the move, you may join different groups, take hundreds of missions, encounter thousands of soldiers, and take them down by using survival tricks, shooting skills, and weapons. Explore the whole place, search for the enemies, and maintain your health while shooting the enemies, make sure to reload the weapons at a time otherwise you will be taken down. Use sniper, Ak-47, grenades, Zoom-in, and zoom-out the facility to keep an eye over the enemy’s activities, complete the mission and get to the next level.