KleptoCats 2 is a Casual, Adventure, and Single-player video game developed and published by HyperBeard

KleptoCats 2 is a Casual, Adventure, and Single-player video game developed and published by HyperBeard. A sequel to the most familiar game is back, along with more cats and challenging levels. Once again, cats are ready to blow your mind using their awesome actions. As you know, the cats are cute, but they have a dark side too. The game doesn’t require many actions from you, as it lets you sit to see who your cat steal random stuff.

Your room is empty, and your goal is to fill it up with insane items and many other things. There are different types of levels available, and each one comes with a unique background and scene to complete. Explore the mysterious land to complete the objectives and earn in-game points to unlock other stuff. KleptoCats 2 includes prominent features such as 2D Graphics, Superb Mechanics, and Smooth Controls. 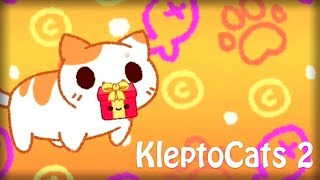 KleptoCats Cartoon Network is a Casual and Single-player video game developed by HyperBeard for Mobile Devices. The game takes place in an enchanting world where the player discovers a cast of cute characters. Once again, the KleptoCats have to invade the colorful lands of familiar series such as The Amazing World of Gumball, Adventure Time, The Powerpuff Girls, We Bare Bears, and more.

There are several challenging levels available, and each one sets in a 2D world where the player requires to complete objectives before leaving the stage. While playing the game, the player can use mystical KleptoScope to travel to different words and see how your favorite cartoon characters interact and engage with the cats. The game’s premise is its idle clicker elements, and the game features over 100 special items.

There are different mini-games for each cartoon, and the game lets you assume your cartoon character’s role to become the master. KleptoCats Cartoon Network includes prominent features such as Earn Coins, Steven Universe, Different Mini-Games, Interaction with Heroes, Secret Mini-Games, and more.

KleptoCats is a Casual, Adventure, and Single-player video game developed by HyperBeard for Mobile Devices. The game introduces different types of cats in one place and involves you playing with those to make them entertained to have fun. Although cats are cute, they have a dark side that they can’t stop stealing items. The game comes with stunning levels, and each one is introducing a set of objectives to complete for in-game points.

As the game starts, you find your room is empty, and your goal is to fill it with the amazing treasure that is only possible to achieve by sending your cat to steal items for you. The game gives you a point-and-click interface to control the movement of your cat. Different rooms are there, and each one is full of stuff. KleptoCats includes prominent features such as 2D Graphics, Challenging Levels, Touch Controls, and more.